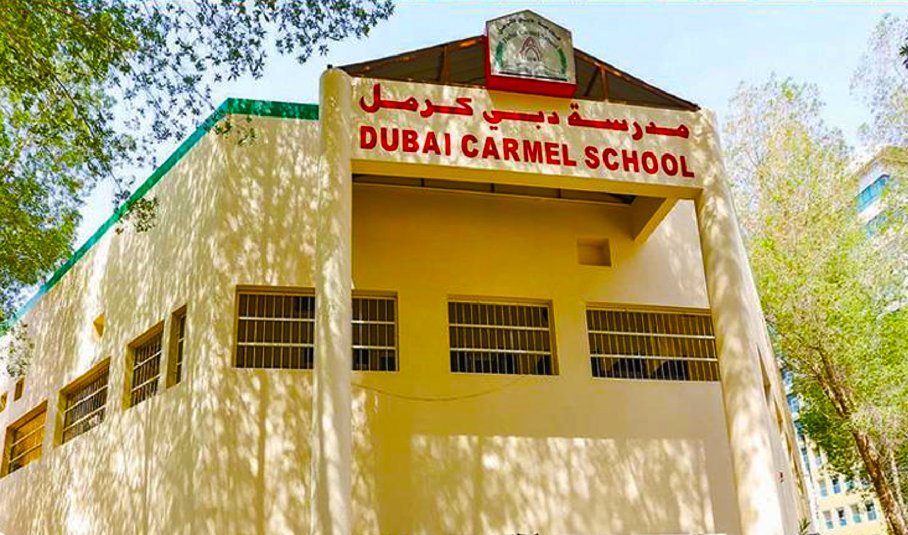 Dubai Carmel School is one of Dubai’s more established Arab schools, although no one agrees when the school was actually founded. The school currently dates its founding to 1995, but the KHDA traces it back further to 1990. Variously elsewhere the school’s routes are traced back to the mid 1980’s. Certainly the school is as far away as it gets from the modern bells and whistles of Dubai’s Elite Tier 1s in appearance and bijou scale.

Dubai Carmel provides an English National Curriculum based all through education from FS to Year 13, although this will culminate in GCE AS Levels rather than full A Levels. This represents an extension of the curriculum in 2016-17 to provide post-16 provision for Carmel students for the first time. The current role is 890 pupils, the largest in the school’s history. Since 2010 the school has grown its role by 168 students. Although 25% growth is small in Dubai terms, Carmel’s campus is compact and restricted and the result is that already compact classrooms are simply too small for the number of pupils.

Growth in student roles in the value sector has followed KHDA restrictions on the ability of schools to increase their fees where they do not meet Good and higher standards of provision. Increasing roles has been the only lever left for schools to increase overall revenue. The trade-off, as here, is a school that has reached a maximum capacity beyond which there is simply no further room to increase the role without overcrowding. In many ways this is a shame as the school brims with the character of its older buildings and is let down by the density of its role.

Current fees, which range between 7,979 AED at FS phase to 13,542 for GCE AS Level provision are on the lower edges of the most affordable in Dubai.

The school introduced (I)GCSE provision in 2007 and the move to AS Level provision builds on a decade’s experience of delivering the English National Curriculum. Carmel lets itself down however, in not providing transparent information detailing the attainment of its students, either current or historic, this leaving prospective parents completely in the dark at its ability to actually deliver the results.

A picture can be drawn, however, to the background under which students are educated. Firstly, the school draws considerably on Egyptian graduates for is teaching roles, but, in many cases, presumably to manage costs, most teachers have no formal post-graduate teaching qualifications. There is a clear difference between a teacher expert in his or her subject field and one with the same core subject knowledge also trained in the metrics of how to actually teach. Telling is the latest summary by Dubai Inspectors:

“The school’s capacity for improvement is hindered mainly by its management structure, teachers’ lack of teaching qualifications and the lack of systematic monitoring and evaluation.”

Second, facilities are limited and basic, but again these are a trade-off for parents in the value fees sector seeking a smaller school and the very different feel and culture that follows. They include an ICT Lab; Science labs; library; its own buses (to help manage costs for parents); a clinic and canteen.

Identified weaknesses include a shortage of English books and practical equipment for children with Special Educational Needs [SE].

Prospective parents should note, however, that this critique is balanced by confirmation from Inspectors that Carmel is a school that works extremely hard with its limited resources to try and improve– and is a school that genuinely cares, with clear passion and commitment, for its student’s welfare and education. This is certainly not true of all schools we have reviewed.

The school’s Principal and owner, Alia Abu Younis, is a good example of a school founder driven by vocation. She is also open to the KHDA which provides exceptional levels of support to schools:

“The KHDA helps us in framing our work and elevating our educational standards. I send my gratitude to everyone who helped and accompanied me on this journey.”

As with many Principals with high levels of investment in their school, however, Inspectors noted that the school’s view of itself is “over inflated” with perception not matched to the reality. This is a double-edged sword. Maintaining a view of strengths against a background of weaknesses limits the capacity to improve. A school Head without a passionate belief in his or her school’s strengths however, is likely to be one that lacks the drive to improve in the face of weaknesses.

The context of the school is as you would expect from one that celebrates its children. There is genuine warmth here and the younger children’s class rooms, colourful and filled with their work, provide a hub for the general sense off vibrancy across the school.

Bottom line? Dubai Carmel School makes it impossible for parents to properly gauge its provision. The school has made efforts with its online information, but has simply not gone far enough. It must open up information transparently across its operational and strategic planning, examination attainment and day-to—day activities. At the most basic level, the school does not publish newsletters, something that children could be involved in producing to celebrate their school. The strongest schools are not scared of advertising their strengths – and weaknesses. As an older school too, Carmel has the wholly unexploited alumni foundations that newer schools can only dream of.

There is so much Carmel can do with its limited resources that will not cost the Earth. Until it does this, the clear ambition of the Head will remain thwarted, and a school that could border the edges of KHDA “Good” school status will remain, as it has consistently for the last 5 years, an “Acceptable” school only. More worrying, Carmel is running out of the levers it does have to increase its revenue further without becoming compromised, something that would be a genuine loss to its existing children and those who will hopefully follow.

Inclusive subject to entrance examination
Notes:
(1) Prospective students must pass an entrance exam in English and Mathematics at all phases
(2) Examination pass is relative to age of prospective child
(3) Examination result will be provided within 4 days with an offer of a place if applicable
(4) Students applying for admission to Grade 12 (AS Levels) are exempted from the entrance exam but must have scored at least a C Grade at (I)GCSE in the subject(s) to be studied

• Small, intimate school dynamics with vibrancy in abundance, particularly across FS and Primary phases
• Bijou campus with the charm that newer schools cannot match
• Historic school with more than a decade’s intellectual capital behind its (I)GCSE teaching journey
• School owner and Head with the vocational drive and passion that comes from a school that has been her life’s work
• On-going drive to improve the school including new post-16 AS Level provision from 2016-17
• Value fees
• Genuine commitment to Arab culture and values

• A KHDA “Acceptable” school that could be much more. Prospective parents will have to decide whether the trade-offs of an intimate campus are worth the price that carries.

Must Read:Open Letter from the Editor. How to Manage Exam Results and Grades for Children in the Year of Coronavirus Covid-19.
Read More
10766