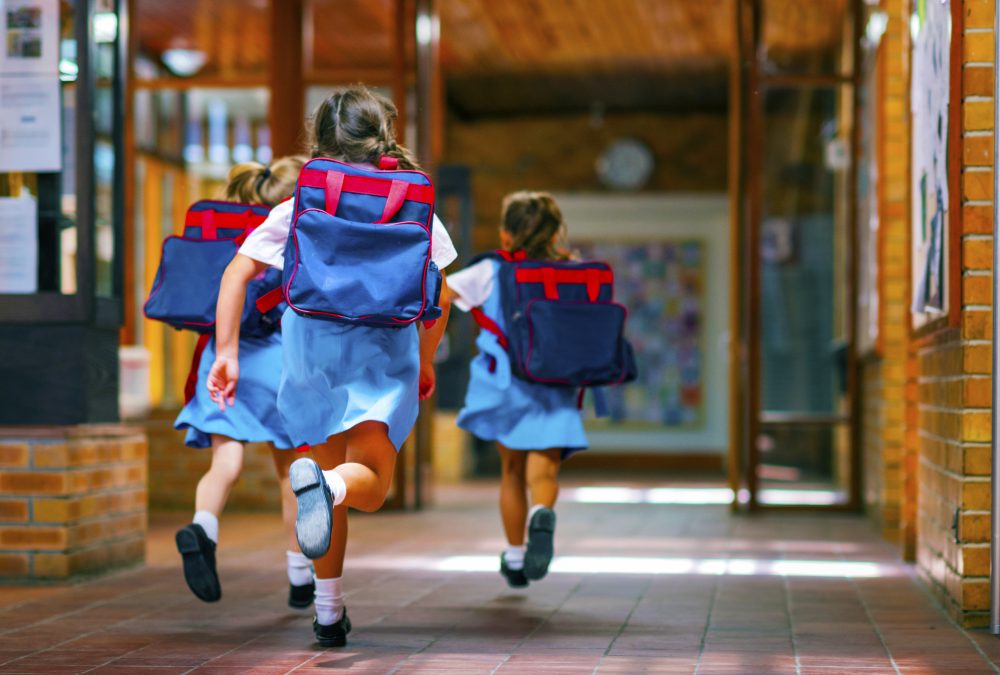 In a move that will be welcomed by many families, the UAE has revised the minimum age for admissions of school students in Kindergarten (KG) and Grade 1 levels across the country.

A child must now be four years old to be enrolled in KG1 – the equivalent of FS2 in the UK curriculum – at the start of the academic year.

This means that for Grade 1 (Year 2 in the UK system), the point at which schooling becomes compulsory in the UAE, a student must now be between six and eight years old.

The new starting age and year group entry ages for children and older students will be effective from next year and the beginning of the academic year on August 31 2021.

The change is significant.

The Current System in UAE schools

Currently, children may start school in KG1 at 3 years and eight months old and compulsory education at Year 1 begins from age 5.  The new rules mean that children will have to have turned 4 by the start of the academic year in September.  Although not specifically mentioned in the announcement from the Ministry of Education, we expect that children entering pre-KG/FS1 will be required to have already celebrated their third birthday by 31st August. 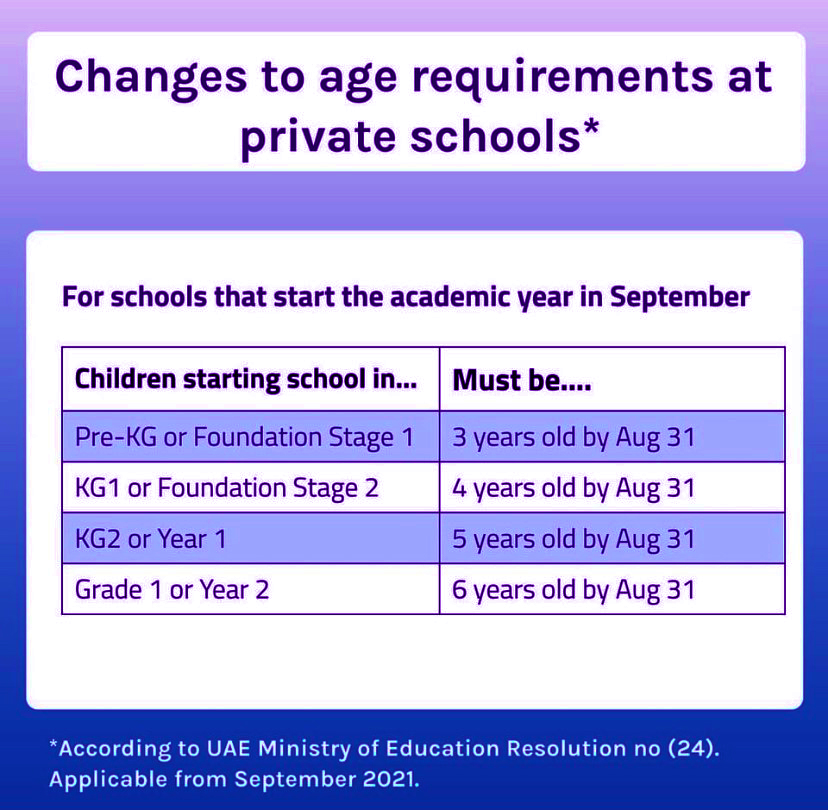 In practical terms, this means that, for English, American and IB curriculum schools, where the school year starts in late August/September (i.e. traditionally “The September Term”), your child has to turn 4 by the 31st August of that year as follows:

As it stands, for Japanese, Indian and Pakistani curriculum schools, which start in April, the current system in which your child has to turn 4 by 31st July of that year will not change until the new 2022 academic year, at which point your child will need to have turned 4 years by the start of the academic year in April.

The Education Regulators (ADEK, KHDA, SPEA and MOE) are expected to clarify the requirements further in the coming period.

How does the UAE now compare with the Rest of the World?

Worth noting that in the UK, for example, Reception year education starts for children between the ages of 4 and 5 years, and Year 1 entry starts for children aged between five and six years. In this context, the decision of the UAE can be seen as progressive and further evidence of the government and education regulator’s commitment to child welfare.

The new starting age aligns more closely with much of Europe and the rest of the world where the starting age for formal education for children is between 6 and 7 years. Many believe that a later start to formal education, ideally to age seven, brings with it much greater child well being and later improvements in academic performance. 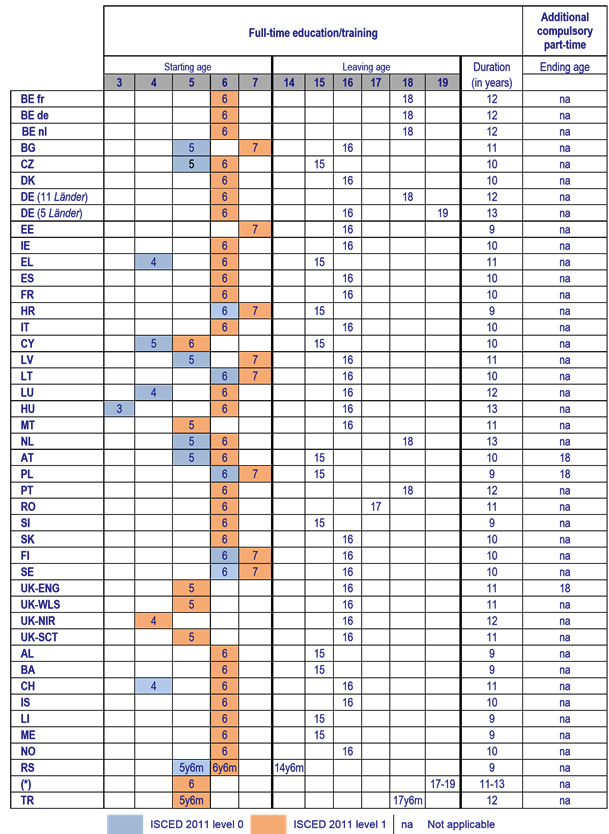 Comparative data for school starting age outside the UAE in Japan, Australia, the US and UK

Should we go further still?

For an interesting article addressing why the starting point of formal education should be delayed still further, see here.

Many thanks to Lyn Soppelsa, Manager and Editorial Consultant at our sister site, WhichSchoolAdvisor.com, for updates and clarifications to this developing story.  Lyn lived in the UAE for 17 years and all three of her children have been educated in part or full in Dubai, in both the UK and IB curricula.  She has been through the process of searching for a new Sixth Form school for her younger daughter to enable a switch of curriculum for her final two years.  Lyn’s interest in education started as a Parent Relations Executive/ Registrar for one of the GEMS schools.  She also worked as the Registrar for a new school. This was followed by eight years working in Relocations.  Lyn joined WSA very early in its development in late 2013 and is a key consultant for complex stories across Which Media.

Posted In
Back to School, Featured, News
Tags
About The Author

Jon Westley
Jon Westley is the Editor of SchoolsCompared.com and WhichSchoolAdvisor.com UK. You can email him at jonathanwestley [at] schoolscompared.com
You might also like
Back to SchoolFeaturedNews
MORE
Read More
86 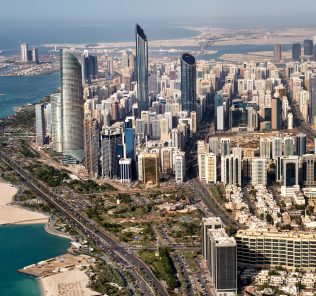 Must Read:ADEK Doubles Down on Stricter Covid Requirements for Abu Dhabi Students and Schools
Read More
88 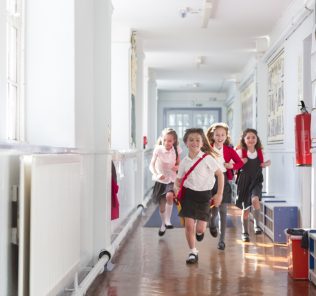 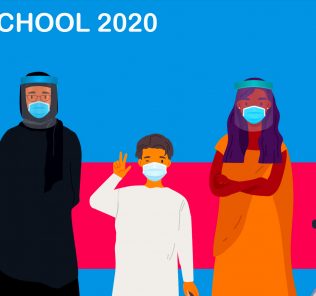 Must Read:Schools in Dubai: Complete KHDA Information for Parents, Students and Children Back to School 2020
Read More
393 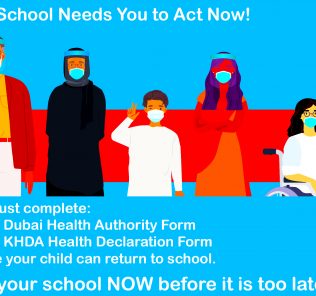 Urgent! Parents Act Now! New Forms Must be Completed for Children to Return to School.
1 Comments
Leave a response

Fight Back Against the Covid 19 Virus in UAE Mass Vaccination Campaign. Hope ...
Next