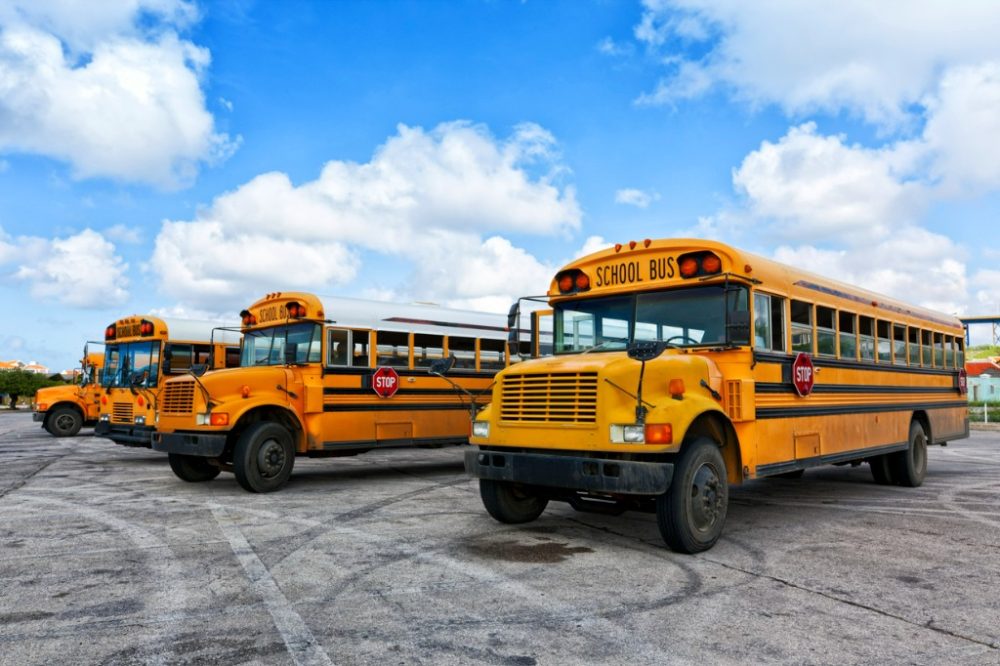 Two school bus incidents this February have sent shockwaves through the community and left UAE parents asking how safe exactly are the school buses we all as parents depend on? The first and most serious incident occurred on 15 February and led to the tragic death of an Ajman schoolgirl. The 12-year-old student got off the school bus at around 3.48pm near her home in the Hamidiya area and was then run over, sustaining fatal head injuries. Ajman Police said on Wednesday, in a post on its social media channels:

“When the student got off the school bus outside her house she moved from right to left. The bus driver [drove] forward without paying attention and ran over her, causing her death.”

Officers said the school bus did not have a bus supervisor on board at the time. The driver has been arrested and an investigation launched.

The second incident happened on 23 February in Sharjah, when a school bus burst into flames in the Al Khan area of the emirate.

Sharjah Civil Defence Operations Room received a call at 2.52pm about a fire on school bus and firefighters from Al Tawaun were moved to the site to get the blaze under control, which they achieved within 15 minutes.

The driver and bus attendants had already managed to evacuate all students from the bus before it ignited, so no-one was hurt in the incident, and an investigation is under way to determine the cause of the fire.

With two school bus incidents making headlines in the same month, UAE parents have been left wondering: is my child safe on a school bus?

Whenever incidents such as these take place, UAE parents’ attention naturally turns to the safety of school buses. Aside from the dangers of possible road accidents or fire, other tragedies that have made headlines in the past include children being forgotten on school buses and suffocating in the extreme heat. These recent headlines have been a frightening wake-up call for many parents in the UAE.  “Hearing about this sort of thing is deeply upsetting for any parent and my heart goes out to the family concerned,” a Dubai-based mother, who preferred not to be named for this article, told SchoolsCompared.com.

“I have considered sending my two children (aged 8 and 6) on a school bus because it would make my life a lot easier, but so far I’ve always hesitated for a number of reasons – and safety is definitely a major one.

Desperately sad incidents like this do make me even more wary of it, although they are rare, and a terrible accident due to a driver not paying enough attention could happen in any scenario – it’s no more likely because it was a school bus.

However, the fact that a fire broke out on a school bus just a week later is very unsettling – although it does seem the driver and supervisor were well trained as they were able to evacuate the vehicle before anyone was harmed.”

For parents who already send their children on a school bus, the bus supervisor is seen as a key point of contact and safeguarding, so the fact that there was not one present in the Ajman accident is worthy of concern. UAE-based father, Ben Lebig, told the Khaleej Times:

“I also have a 12-year-old daughter and she travels by her school bus every day. The role of the supervisors is important as whenever there has been a delay in pick up or drop off, it’s the supervisor who is called. She receives calls or informs us as to why the delay is happening. The driver cannot convey messages as he is driving.”

Jenny Mollon, Senior Editor of Which School Advisor, and mother of 7 and 11-year-old boys who take the bus home from their school in Dubai, is also in frequent contact with the bus supervisor:

“I have the number of the bus supervisor, or ‘bus nanny’ – and I have the driver’s number as well. If ever the children are absent, I message them and say they won’t be on the bus today. They also have a text message system that alerts the parents if the bus is ever running late – although that’s very infrequent.

I do worry about safety to some extent, but I am pleased that it is only a short trip from school to our house, as my boys are the first children to be dropped off. They also get dropped off right outside our front door. I had to personally campaign to the bus company for that to happen, but I do feel it is safer.”

How safe are UAE school buses? 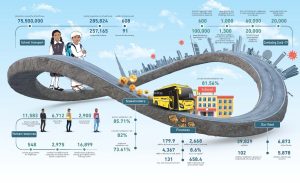 More recently in 2020 Emirates Transport (ET) – which operates school bus services for 608 public UAE schools and 91 private UAE schools – rolled out an intensive programme of safety training and qualifications for school bus drivers, which led to a 50% decrease in the numbers of severe accidents involving school buses in that year compared to 2019, according to the ET 2020 annual report. The total number of accidents across all levels of severity remained almost the same year on year, reaching 755 accidents in total, of which 10 were classed as serious in 2019 and only 5 were classed as serious in 2020. Around 90% of the accidents involving school buses were categorised as superficial or minor.

The initiative Road Safety UAE, which collects data on road safety in the country, does not, however, have statistics on school bus safety specifically, says managing director Thomas Edelmann. “However, it’s fair to say that the authorities push hard for school bus safety.”

A series of government road safety plans and  initiatives over the past 5-10 years have been seeing a positive impact. As part of the National Agenda 2021, the UAE’s Ministry of Interior and local traffic departments have been working hard to reduce the rate of road traffic death per 100 thousand people. In 2018, the rate of road traffic death decreased to 3.83 per 100 thousand people, which then went down to 3.14 per 100,000 people in 2020.

Bus supervisors should be on every school bus

Safety precautions such as trained bus supervisors are a pre-requisite on every school bus in Dubai, according to the Road Transport Authority (RTA) guide for school transport, which contains a comprehensive list of stringent bus safety measures:

Meanwhile student safety is at the heart of everything that private school bus company STS (Smart, Timely, Fast) says that it does, and is the guiding principle behind the design of its Smart Buses, of which more than 3,100 operate in the UAE.

As well as internal and external CCTV and hazard-warning safety cameras positioned around the whole outside of the vehicles, the STS Smart Buses also feature a ‘Child Check’ button – which drivers press after completing a manual safety check of the whole bus after finishing their journey – as well as a Motion Sensor, which detect even the slightest movement on the bus after it has been parked, safeguarding against any possibility of a sleeping child being forgotten on the bus. The Smart Buses even have a Driver Fatigue Camera, which consists of a driver-facing camera, mounted on the driver’s dashboard with a full view of his face and eyes. The camera uses pupil identification technology to analyse the driver’s blink rate. It picks up other fatigue indicating behaviour such as yawning and head drooping. Behaviour such as mobile usage and oral intake also trigger warnings.

However, road traffic accidents in general remain the second biggest killer of people in the UAE, and a leading cause of death of children. Government guidelines and technology are only part of the equation in school bus safety and avoiding future tragedies, says Road Safety UAE’s Thomas Edelmann. Road traffic around UAE schools is an ongoing problem, he says, and parents themselves are often guilty of risky driving that could endanger children.

“Also key to school bus safety is the ongoing training and education of all involved stakeholders: school bus operators, school bus drivers and attendants, students, parents, school personnel, motorists. The entire eco-system must make sure that student transportation is safe.” 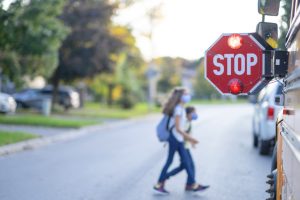 Obey the school bus Stop sign or get fined
According to the UAE’s Federal Traffic Law, which came into effect on July 1, 2017, motorists will be fined Dh1,000 and receive 10 black points if they fail to stop when the school bus driver activates the stop sign.

The school bus driver faces a fine of Dh 500 and six black points if he fails to activate the stop sign or in case of non-compliance with traffic instructions.

The following is excerpted and adapted from the RTA School Transport Manual:

How parents can drive safely around school buses

How students can behave safely on the school bus

Tabitha Barda
Tabitha Barda is the Senior Editor of SchoolsCompared.com. Oxbridge educated and an award winning journalist in the UAE for more than a decade, Tabitha is one of the region's shining lights in all that is education in the emirates. A mum herself, she is passionate about helping parents - and finding the stories in education that deserve telling. She is responsible for the busy 24x7 News Desk, our Advisory Boards and Specialist Panels - and SchoolsCompared.com's The School's Report - the global weekly round up of what matters in education for parents which is published every Friday, reviewing schools across the UAE - and features on issues that really matter. You can often find Tabitha on Parents United - our Facebook community board, discussing the latest schools and education issues with our parent community in the UAE - and beyond.
You might also like
UAE parents
MORE
Read More
292

Must Read:Schools Report UAE: What made the news for schools, parents and students in education this week?
Comments
Leave a response